Maybe someone of you have heard about《PowerPhrases》which have another name called “The perfect words to Say it Right and Get the Results you want”.

Is it looks interesting for you ? let’s start read it.

The brain graph abou this books is: 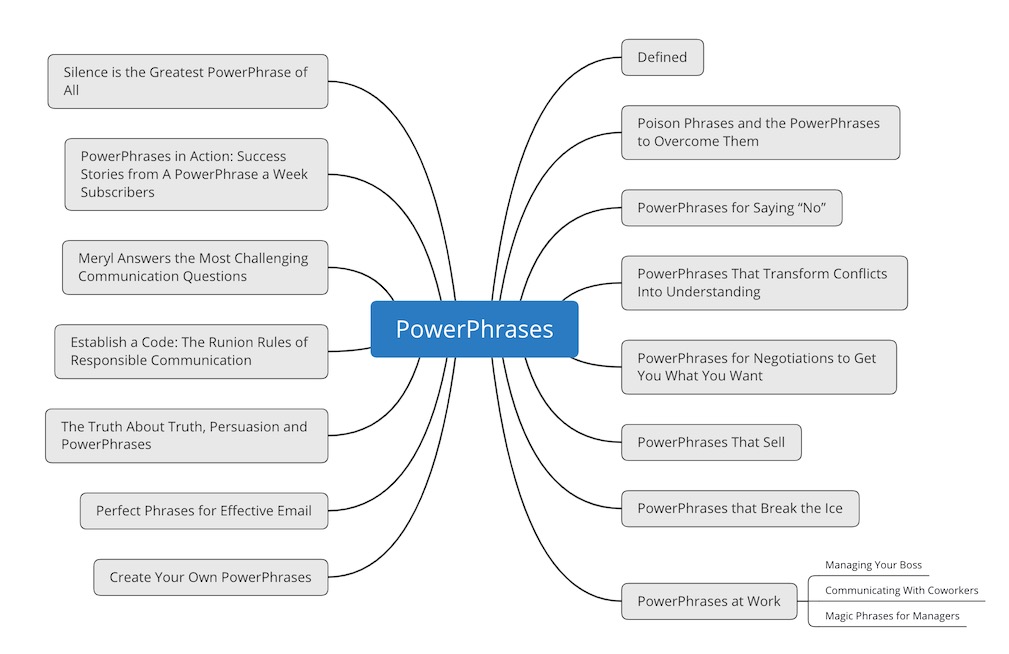 What is it used for?

PowerPhrase: A short, specific expression that gets results by saying what you mean, meaning what you say, and not being mean when you say it.

PowerPhrase wisdom says, before you speak, ask yourself:

Qualifiers, hedges and softener phrases weaken your message. Anything you say that does not add to your message makes it weaker:

Speak with certainty and decisiveness. If you cannot be certain on one position, express what you can be certain about.

6. Replace Victim Poison Phrases With PowerPhrases That Place Responsibility and Emphasis Where It Is Due

Those phrases imply you have no control over your own emotions. You don’t want to send that message. Avoid implying that you do not have the ability to choose alter- native thoughts and behaviors.

You may have heard it suggested that you should replace accusative sounding “you” statements with “I” state- ments, such as:

If the point you want to make is that Joe’s tardiness caus- es you all kinds of problems, do not make Joe or yourself the subject of the communication. Rather than saying:

— You make me mad when you come late.

— I get angry when you are late.

Use a PowerPhrase to Place Responsibility and Em- phasis Where It Is Due, such as:

— You are not being clear. (Accusatory)

— I am not following you. (Makes you the subject.)

Instead use a PowerPhrase to Place Responsibility and Emphasis Where It Is Due, such as:

The Three-Step Process for Saying “No”

When You Refuse a Request, ACT!

Say something to recognize their request. Make a short comment to let them know that you heard them and you are considering what they said.

Tell them a little bit about your own situation. Be brief. Mention what it is that keeps you from being able to honor their request.

3. Transform your refusal into a positive. Suggest alternatives or make a comment that reaffirms the relationship such as:

Put them all together and you have a three-step “no.”

Saying “No” in Two Parts

When you say no in two parts, it sounds stronger. Some people’s sensitivity causes them to hear the slightest hint of “no” as a personal rejection and they need a softer ver- sion. Use all three steps for them. Others do not take it as personally, and a two-part no works well.

There are some people that will argue with and attempt to manipulate anything we say. A two-part no works better with these.

Power Thinking to the Rescue

What are you telling yourself that keeps you from saying “no”? Don’t think:

— I shouldn’t say what I think.

Instead, use Power Thinking. Think:

When a Simple “NO” Is a PowerPhrase

Stronger PowerPhrases can be called for when:

Turning Your NO Into a Negotiation

Sometimes, rather than completely refusing a request or offer, you can suggest alternatives. For example, when one assistant was asked to make copies, she said she would love to but she had a huge stack of orders to file. Then she used the PowerPhrase:

PowerPhrases That Buy You Time

Delay phrases lack the power of a clear refusal, but are superior to a yes when you do not mean it. Learn the PowerPhrases for Buying Time.

When They Ask, “Will You Do Me a Favor?”

Instead, use a PowerPhrase for Getting Clarification Before Agreeing, such as:

PowerPhrases That Transform Conflicts Into Understanding

Power Thinking to the Rescue

— I better avoid this disagreement. — I can’t handle conflict. — Who do they think they are?

Instead, choose Power Thoughts, such as:

When conflicts arise, you must know how to make your CASE! That means:

Seek first to understand, and make it clear to them that you do. Then seek to be understood.

You will get excellent results when you demonstrate interest and concern as the first step in managing conflict. Explore your assumptions by asking questions. Ask your questions gracefully.

Also avoid accusative, closed-ended questions that result in defensiveness, such as:

Instead, use a PowerPhrase to Ask Clarifying Questions, such as: